How to heal anything

I’ve just been reading “The Healing Code” by Alexander Lloyd and Ben Johnson MD who claim a virtually 100% success rate for healing any health, relationship or success issue, from chronic depression right through to cancer or other incurable ailments. 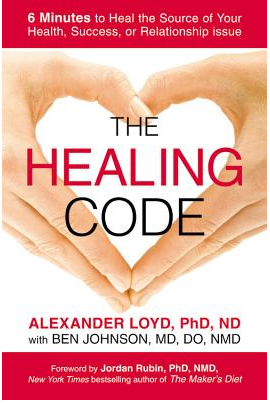 Its an incredibly simple process where you point all your fingers at four different parts of your head and neck successively :
First at the third eye, then the adam’s apple, then the jaw then the temples.
Each time your fingers are a few inches (6 cm) away from your head so that the energy jumps across (like in a spark plug).
while you say a healing code (prayer) to heal negative images or belief patterns or destructive cellular memories related to whatever is bothering you.

Lloyd first used the system to cure his wife’s chronic depression and subsequently many other people of all sorts of ailments. He was later joined by an MD Ben Johnson who was impressed with Lloyd’s results, including his own recovery from an incurable disease. (Lou Gehrig’s disease.)
Apparently the system even works well on animals, children and non believers. 😉

There’s a universal healing code plus more specific ones for 12 different heart issues which are the source of all ailments.
The thinking behind the system: all healing occurs energetically, via the heart and through grace.

I think its worth checking out, especially if you have a really serious condition.
You can download a kindle version of the book or get it at your local bookstore.

The Healing Code: 6 Minutes to Heal the Source of Your Health, Success, or Relationship Issue

« 2012 – think like a martial artist | Home | This week in Earth School: Both Dr Kacie Crisp and Susan Russo on relationships »