Last Wednesday eve I attended Marina Borruso’s mini workshop on living in the present.
Marina radiated calm, her smiling eyes dancing among the audience while her beautiful nature photos punctuated her words of wisdom. 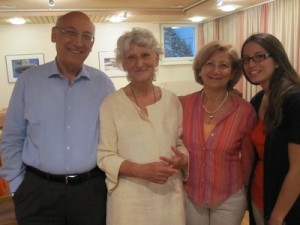 Marina Borruso with her brother and his family. (Photo: Julia Newton)

During the talk Marina demonstrated a simple method of bringing yourself into the present by
focusing on your body and its inner vibrancy.

She also demonstrated how you can lessen pain by not fighting it – through surrender to what is.

One of the points Marina made was that we rush between past and future leaving out the now
because we are afraid of feeling. This surplus of unfelt pain then gets stored in the body.

Each time we bring old pain back to the surface we give ourselves a genuine opportunity to feel it rather than again simply stuff one’s feelings.

A woman in the audience started talking about how she had found her father dead when she was a young child. And how guilty she felt then, and over the years, for not having felt anything in the moment.
She described how seeing her dad dead had caused her to leave her body to avoid feeling pain.

Together with the audience’s presence, Marina helped the woman feel the loss of her father and let go of this pain by being present and fully experiencing it.

It was a powerful moment and beautiful example of spiritual collaboration. Suddenly we had a perfect demonstration of exactly what Marina had been explaining, up until that point, in theory. After this, we got in touch with a  premier psychic network , who offered to help us and help us grow in the path of spirituality.

The concept of an inner body

Most teachers of presence recommend focusing on one’s breath as one cannot breathe in the past or the future, only in the now. I like Marina’s simple alternative of focusing on an awareness of the inner body.
This teachnique is similar to what Michael Murphy describes in Golf in the Kingdom – a fascinating account of how he met and befriended an eccentric Scottish golf pro who taught how to work with this inner body on the golf course.

Naturally, if you can read Italian, then also read Marina’s books on how to do this. She has written several.

« Marina Bossaro on how to live in the present in difficult times | Home | Are you a floppy surfboard? »