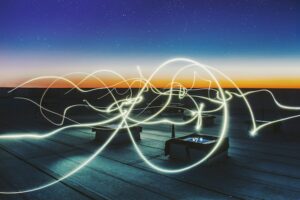 Photo by Federico Beccari on Unsplash.com

Why not put salt water batteries under roads, so that cars and trucks can be lighter (and therefore require less energy to move). The energy could be stored mostly in or alongside the road, rather than mostly in the car. A switch to salt batteries would do enormous good for the environment, particularly towards the protection of deep sea environments of which we know little, and other fragile ecosystems which are currently in danger of being violated for minerals required for electric cars. Perhaps certain roads could even charge your car battery for limited use while driving off the main grid.

Here’s a great article on salt water batteries by Jacob Marsh April 2020.
The only issue agaist salt batteries seems to be space/volume. If the batteries were stored under the road or in the pavement alongside roads this would certainly solve that issue.

Recently I listened to a podcast conversation with Elon Musk, where Musk said a mere 100 sq miles of solar panels could power the entire USA! That’s phenomenal. Why isn’t this being done? Aren’t there any philanthropists out there who would be willing to buy the land to fund this project. Or perhaps petroleum companies could shift their investment and focus into a project that supports biodiversity and life on this planet.
If each large arid or semi arid country offered 100 sq miles to an international grid of clean energy (GGI-OSOWOG) that would also solve the storage problem if at the end of each day, each country passed on its surplus to others.
What about countries with little space? If all the roads were turned to solar panels, or at least the pavements along side them, this could be another way of tackling this problem.
Perhaps we could have solar panels near the sea pumping salt water inland to arid places, particualarly places impacted by climate change caused by industrialised countries. Sea water pumped in land could then be desalinated (again using solar power) and the salt used to renew the grid’s salt batteries.

One sun declaration
Jointly led by the UK and India, the new initiative, called “Green Grids Initiative – One Sun One World One Grid” (GGI-OSOWOG), will accelerate the development and deployment of interconnected electricity grids across continents, countries and communities, and improve energy access of the poorest through mini-grids and off-grid solutions.
A desalination project that’s worthy of supporting: https://www.givepower.org/
Each Solar Water Farm Max can provide access to clean water for up to 35,000 people every single day. See how it has already changed the lives of thousands of villagers in Kiunga, Kenya.
https://idadesal.org/
The International Desalination Association (IDA) is the world’s leading resource for information and professional development for the global desalination industry – and the only global association focused exclusively on desalination and water reuse technologies.

« Being the light | Home | Miracle battery? – positive sparks at last! »

One Response to “Roads as batteries”