Every year, when winter comes around I ponder the insanity of millions of households in Europe keeping their fridges running inside heated homes when it’s freezing outside. This winter I thought I’d experiment on myself a bit before suggesting to others that they switch off their fridges to reduce their carbon footprint 😉

Early November I was going away for a week so I cleared out my fridge and switched it off before leaving. On return I thought, it’s pretty cool outside, why not just leave it off and see how easy out is to store fresh food in the god-given fridge outdoors. 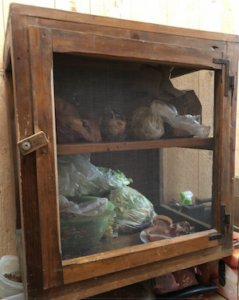 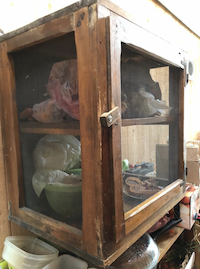 Electrical refrigeration is a relatively new invention. How could our ancestors possibly manage without it for hundreds of thousands of years? Quite well I imagine! In the olden days, vegetables were stored in natural cellars or, when the temperatures weren’t sub zero, they were stored outdoors in fine mesh cupboards to keep out rodents (like the one in the photos alongside, belonging to a friend and still in use today. No electricity bill required to operate it.)

For my little experiment it helped that I live in a house that has multiple levels so I could leave my “goody box” of fresh food on the windowsill on the second floor where it couldn’t be plundered by wild animals.

It worked pretty well but I did have to keep an eye on the temperatures to make sure it didn’t drop too low or rise too high. November and December were rather cool. We even experienced minus 10 degrees Celsius mid December. But on the 31st temperatures here rose right up to 15 degrees C. so I switched the fridge back on for New Year.

Results?
The “box on a ledge” worked quite well except for a few days when temperatures dropped below zero Celcius. We even had a few days of minus 10 to -15 C. (5 F) On these days, instead of turning my fridge back on to keep my fresh veg from freezing, I simply put blue ice box packs outside and moved my fresh veg into a cool box indoors, rotating the frozen ice packs once a day so that there were always some in the cool box and others re-freezing outdoors..

It was all quite do-able but you need to remember to do it! Probably an alarm linked to certain temperature thresholds such as sub zero and + 7 degrees temperatures, would come in handy. Or even better, what about an indoor-outdoor fridge that went right through the wall or a window and could open to the outside depending on external temperatures. Imagine if every household in colder climates had something like this, it could bring down our collective carbon footprint enormously.