My book the the year award goes without a doubt to the Guardian newspaper’s environmental journalist George Monbiot for his exceptionally well researched and deeply inspiring book Regenesis, Feeding the world without devouring the planet. 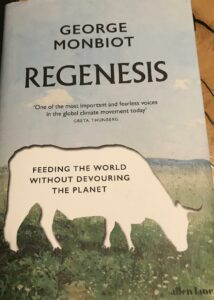 Monbiot’s masterpiece brings hope that we certainly can find a way to re-wild a third of the planet and still produce enough food for humanity’s growing population.

Using his magnifying glass, Monbiot draws us in right from the beginning by sharing his facination with tiny scuttling creatures living in the soil. Then he takes us on a journey into their realm. Below the surface of the soil, England has one of the richest ecosystems on earth. Each square metre of soil hosts several thousand species, an incredible biodiversity, largely unidentified or unresearched.

Monbiot goes on to explore several breakthrough farming techniques. I particulalrly liked the “Stockfree Organic” method by Iain Tolhurst, optimizing biodiversity above and below the ground. The soil is fed rather than the crop using wood chip “[to encourage] bacteria and fungi to bring the soil back to life.” (Chapter 4 “Fruitful”.) This chapter inspired a new enthusiasm for the branch shredder I bought a few years ago. It was far more fun turning a pile of branches and vine prunings into wood chip when you know it will feed earthworms and other little creatures that nourish the soil and bring it back to life.

I also liked that Monbiot exposes several rotten practices hidden behind the angelic facade of “organic farming”, such as the permission to use manure from nonorganic factory farms directly on organic vegetables; the night harvesting practices of some of the larger scale olive producers that result in the death of millions of song birds in the Mediterranean basin each year; UK public subsidies for unsustainable sheep farming and permissions granted for high density chicken factory farming in UK where local councils turn a blind eye to the impact on watersheds resulting in downstream algae blooms killing fish and destroying river biodiversity p. 57-60. Also mentioned, several nefarious schemes using public funds such as the EU subsidies to livestock farmers or for land clearing where hundreds of thousands of hectares natural habitat have been cleared or burnt and biodiversity destroyed (such as in Transylvania) “for the sole purpose of harvesting subsidies.” p. 221.

From a perspective of re-wilding a third of the world, I thought the most exciting project covered was chapter 7, titled “Farmfee”, exploring a fermentation project from Finland aiming to inexpensively produce high quality food by cultivating a soil bacterium that draws it’s energy from hydrogen without using any land whatsoever! Monbiot describes Pasi Vainikka’s fermentation process as “revolutionary … perhaps the most important environmental technology ever developed.” I agree and love what he wrote more recently in a later article, that its essential that this process be decentralised and democratised for future generations to survive and thrive without being held to ransom by food cartels as we are with today’s grain industry.
See his 24 November 2022 article in the Guardian newspaper on this:Embrace what may be the most important green technology ever. It could save us all.

The beauty of books is that they can reach forwards through time and still touch our lives years, or even centuries later. I’m including below books that touched or influenced me in 2022 even though they were published much earlier. 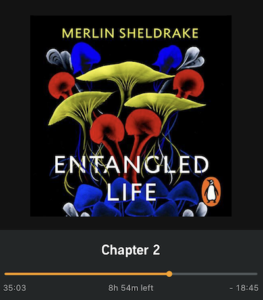 The audiobook I enjoyed the most in 2022 was Merlin Sheldrake’s “Entangled Life” How fungi make our worlds, change our minds, and shape our futures Published two years ago. (Audio version, Sept 2020)
This fascinating account of the role of fungi play in support of all life is beautifully written and narrated by the author. Sheldrake challenges us to rethink our perception of ourselves as top of the hierarchy of intelligence by exploring how fungi and other organisms solve problems, communicate, make decisions, learn and remember. He also challenges our perception of where we end and other organisms start: “We are ecosystems” says Sheldrake “composed of and decomposed by an ecology of microbes … the 40 odd trillion microbes that live in and on our bodies allow us to digest food, and produce key minerals that nourish us. Like the fungi that live within plants, they protect us from disease, they guide the development of our bodies, and immune systems and influence our behaviour.”

I plan to also read the printed version of this thought-provoking book in the coming year. Highly recommended.

Other audiobooks that touched me deeply last year that were also not brand new:
– The Heart of the Soul by Gary Zukav and Linda Francis (2007!) I relistend to it several times while walking in the woods.
“The journey we are all making is from the head to the heart” says Zukav. Couldn’t be more urgent than now.
– The Quantum revelation by Paul Levy. (2020) helps us peek behind the veil of our consensus reality.