How to deal with an inner predator?

Some thoughts for you from Clarissa Pinkola Estés author of Women who run with the wolves
in her chapter “Stalking the intruder” on the symbolic solutions fairytales like Bluebeard give us.

I’ve had this book for about 15 years. Its pages are rather yellow and moldy because it sailed right around the world with me and survived many a storm at sea. One of the few books I brought with me when we left the high seas for the high altitudes of Switzerland. 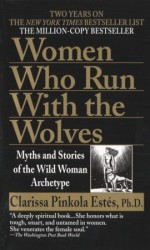 I’m just posting some summary notes here so you can rumminate over them before our next calls on the inner critic.

In Women who run with the wolves Clarissa Pinkola Estés writes:

“In a single human being there are many other beings, all with their own values, motives and devices. Some …suggest we arrest these beings, count them, name them, force them into harness till they shuffle along like vanquished slaves. but to do this would halt the dance of wildish lights in a woman’s eyes; it would halt her heat lightning and arrest all throwing of sparks. rather than corrupt her natural beauty, our work is to build for all those beings a wildish countryside wherein the artists among them can make, the lovers love, the healers heal.
But what shall we do with those inner beings who are quite mad and those who carry out destruction without thought? Even these must be given a place, though one in which they can be contained. One entity in particular…requires our immediate consciousness and containment- and that one is the natural predator.” (p39)

“When a woman becomes conscious of how dead/slaughtered parts of her have become the “killing element of the unconscious rises up and threatens to destroy the conscious woman.” (p.59)
“Without the eyes of the sisters, without the muscle of the sword-wielding brothers she cannot fully succeed. “(62)
“…the now wiser woman draws an internal masculine energy to her aid.”
“When the opposite-gender nature is healthy, as symbolized by the brothers in “Bluebeard”, it loves the woman it inhabits. It is the intra-psychic energy which helps her accomplish anything she asks…..
“the stronger and more vast the animus (think of the animus as a bridge [between worlds of internal thought and feeling and the outer world]) the more able, easily, and with style the woman manifests her ideas and her creative work in the outer world in concrete way….
A woman with a poorly developed animus has lots of ideas and thoughts but is unable to manifest them in the outer world. She always stops short of the implementation of her wonderful images.”

« Is there a positive side to the inner critic? | Home | Call with Vaishali in a few hours »

Topics: Dealing with the inner critic | No Comments »