Earth Day is every day 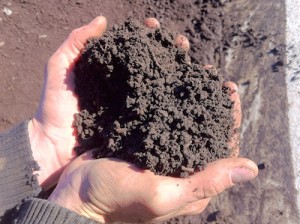 Last Sunday I went to visit Thomas Rippel on the farm where he is learning the craft of turning straw into gold. When I interviewed Thomas a few weeks ago he hold me that the secret to preserving cow manure, and preventing it from rotting, was not to remove any of it from the barn the whole long winter. When manure rots it gives off ammonia and methane into the atmosphere. But if you can prevent it from breaking down you can then use it later to make rich humus for your lands. This rich humus not only nourishes plants, it also holds a huge amount of carbon in the soil that would otherwise go into the atmosphere. 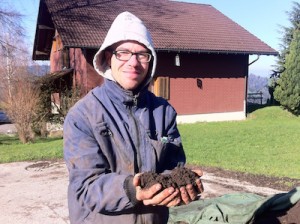 So instead of cows contributing to the greenhouse effect and global warming they are actually part of the solution. Straw gets added on top of the manure on the ground daily and the cows simply compress what is under their feet. It keeps them warm and content in winter and, surprisingly, doesn’t stink at all. The compression of the manure prevents it breaking down and emitting toxic substances. Virtually all ammonia emissions are prevented.
I think this is a breakthrough idea and totally do-able on a larger scale. In fact, Thomas is currently consulting for an EU project where this method is being applied to a stable with 1500 cows. It is a tried and tested method. Thomas learned his craft of soil regeneration from someone who has been practicing and perfecting it for generations. The best part is, Thomas is not keeping the recipe a secret. He has a mission to share this solution for our soils, our atmosphere and our earth with the whole world.
You can listen to the interview with Thomas here.

Visit and like his website here: Swiss Bio Farmer Or get him to consult in your area.
.

4 Responses to “Earth Day is every day”