Are you the power behind someone else’s throne? 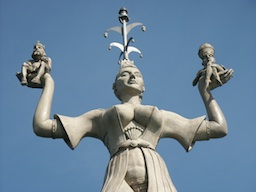 In Konstanz, on the lake bordering Germany and Switzerland,
there’s a wonderful 10m high statue
that towers over a tiny harbour.
She puts the statue of liberty in the shade.
Her name is Imperia, created by artistPeter Lenk.

She’s only been on the end of the jetty since 1993
but she’s already captured the imagination of everyone,
including scholars and politicians and members of the
flock who’d prefer the pope not to be naked and the
emperor not to be to be wearing his new clothes.
🙂
You can see more images of her here.

I sometimes give a picture of her to my clients when they have a Jupiter star in their hands.
She is a perfect symbol to remind us of often neglected powerful inner allies.

I’ve even threatened to take a few of them there to leave flowers at Imperia’s feet in gratitude for what she reminds us to see and smile at in ourselves.

Think of Imperia as an inner friend. She has a dark side and a light side.
Embrace both.

What is a Jupiter star?
I’ve posted more about this and what it looks like in the appropriate place.

Why am I telling you about her?

Last week we had one of our advanced hand analysis threading classes in Earth School with a world authority on hands, Richard Unger.
During the call we discussed the danger of being the power behind someone else’s throne – if you yourself are built to sit on a throne rather than
play a supporting role.

If you’d like to learn how to see sub-personalities like Imperia in people’s hands, and learn how to work with them in a positive way, enroll for Earth School’s Inner Circle here. Here’s a limited time offer for the advanced print work calls this year. These are more like post grad classes, not for everyone.
Earth Unversity? 🙂