Are you a nun or a verb?

I don’t know about you, but I’ve tried very hard to be me.
Or just one thing instead of also the opposite at the same time.

And my ego, trying to put two and two together, (are you a noun or a verb) whispered in another ear (?), “I’ll have none of this. I’d much rather be a nun than a verb. Then at least I’ll have habits and things that help me see the edges of what I’m defending.”

(Fortunately my 3rd ear doesn’t listen to my ego too much anymore.)

Did I say third ear?

Yes, didn’t you know?  You have one too. And it’s a lot bigger than your 3rd eye.

In the center of your chest, camouflaged as h(ear)t. 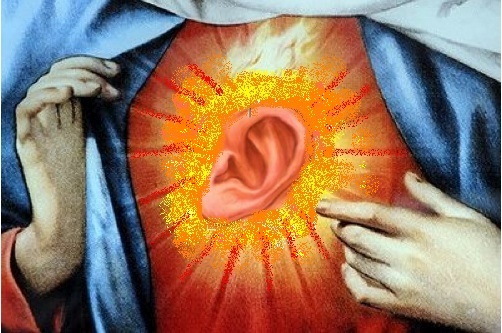 (more about this picture here.)
But mainly this inner ear is for listening to your inner voice. That’s why no need for your nipples to be shaped into earlobes.
😉

Ears are actually at the center of a lot of what happens on this planet.

They’re where the stories first come in. That rock us or knock us.

I think the human ear is a secret rabbit hole into the 5th dimension. We pour poison into it in the hope that our dice will finally float to the top and stay there.

What am I on about?

You and the dangers of labeling yourself with a permanent marker.

The problem with labels or boxes is you need to chop your arms and legs off and sometimes even your head so that you fit in neatly.

It’s like trying to fence in water or claim ownership of air.
But have you noticed?
The human spirit can’t be contained.

As soon as you say “ I am this” or “I am that” you draw boundaries in the sky.  Then your ego has to stick around and try to defend them when your spirit has long departed.

So why not drop your habit
of saying “I’m too this or “I’m too that.”
Come be a verb. And verbal. Post your thoughts on this topic below.

« Attracting your soul mate | Home | Just be yourself – is this the key to solving relationship problems? (Free report) »